Ian Brady and Myra Hindley were responsible for the murders and rapes of 5 children in the 1960s.

Brady was born Ian Duncan Stewart in Glasgow, Scotland to his mother Maggie Stewart, a 28-year-old tearoom waitress. His father is unknown. When Brady was twelve, maggie moved to Manchester with her new husband, Patrick Brady. From a young age, Brady enjoyed torturing and killing animals, he even set a dog on fire. As a child he began attacking children at the school he attended.  Brady became interested in World War II and the Nazis and even tried to learn the German language. Among his favourite books were Hitler’s autobiography Mein Kampf, Dostoyevsky’s crime and punishment, Marquis de Sade’s Justine and less well-known books about sadism. During his teenage years between thirteen and sixteen, he was charged with housebreaking and burglary three times. After the third time, he moved in with his mother and stepfather in Manchester, where he took up crime again, spending time in two juvenile centres. In 1957, having learned bookkeeping while institutionalised, he got a job as a stock clerk at Millwards Merchandising, where he met Myra Hindley a year later.

Myra Hindley was born in Manchester and had a relatively normal childhood. She was raised in a working-class neighbourhood. Her parents were Bob, a labourer who was doing military service during her first years, and Nellie Hindley, a machinist. Bob was also an alcoholic who physically abused Hindley. He also taught her how to fight and stand up for herself. In one incident when Hindley was eight years old, a boy scratched her cheek deeply. When her father told her to fight back, she sought him out and knocked him down. When the Hindleys’ second child, Maureen, was born in August of 1946, Myra was sent to live with her maternal grandmother, Ellen. Throughout her early school studies, she had a poor attendance record because her grandmother tended to keep her at home for even the slightest reasons. She did however have excellent grades, enjoyed sports and was a very good swimmer. She wasn’t considered very feminine and was nicknamed “Square Arse” because of her broad hips. In her teens, she was a popular babysitter.

When she was fifteen, a friend of hers, Michael Higgins, drowned in an accident and she became very traumatized; she had turned down an offer to go swimming with him that day and thought she could have saved him if she had joined him. She also started bleaching her hair. Not long afterwards, she left school and got a job as a junior clerk at an electrical engineering firm. When she was seventeen, she was briefly engaged to a local boy named Ronnie Sinclair, but broke it off because the idea of married life didn’t appeal to her. In 1961, Hindley, then eighteen years old and four years younger than Brady, got a job as a typist at Millwards Merchandising. She fell in love with him instantly, but it took him a year to reciprocate. After a Christmas party, he offered to walk her home. Outside her home, he asked her out on a date. They started going steady, usually going to the movies and then to Hindley’s house to drink German wine. Brady taught her about Hitler and the Nazis, talked about Marquis de Sade and shared his belief that rape and murder was not wrong. Devoted to him, Hindley started dressing in short skirts and long boots, continued bleaching her hair and even stopped going to church when he told her there was no god.

Hindley stated in July of 1963 that Brady started talking about commiting the perfect murder. Later on, on the 12th July their first victim was taken, 16 year old Pauline Reade. 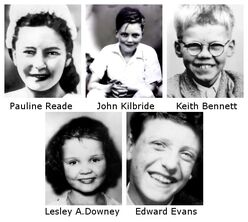 A few months later in November they took their second victim, a boy named John Kilbride aged 12 years old. Brady’s motive was to slit his throat but failed and ended up strangling him with a bit of string. The following year June of 64 they took their third victim. Keith Bennet who was 12 years old. They took him while he was walking to his grandmothers, they killed him and he was never seen again. Boxing day of 64 they took their fourth victim from a fairground, ten year old Lesley Ann Downey. They took her home, undressed her and made her pose nude for photographs, they then proceeded to rape and kill her. The whole event was recorded and she was later buried on the moors, her body found 10 months later on october 6th 1965. Their fifth victim 17 year old Edward Evans was invited to Hindley’s apartment where Brady killed him with an axe. David Smith who was the husband of Hindley’s sister Maureen was there in the flat and had witnessed the event. They allowed him to live and when he finished helping them clean up, returned to his wife and phoned the police. The police immediately investigated the apartment and found Evan’s body wrapped in a blanket with his murder weapon.

Brady was arrested on scene where he then tried to blame David Smith for his involvement. The flat was searched again on October 15th where the photos of Lesley Ann Downey were then found along with the recordings which implicated Brady and Hindley as their voices were on them. A notebook was found with John Kilbride’s name on it and a photograph of Hindley standing on his grave.

Their trial began on April 27, 1965 and ended with both of them being found guilty of murder. Luckily for them, England had abolished capital punishment just a few weeks before their arrest and they were sentenced to life in prison.

In 1985, Brady confessed to the murders of Pauline Reade and Keith Bennett and the investigation was reopened. Both were taken to the Moor by the searchers to show where the bodies had been buried. On July 1, 1987, Pauline Reade’s body was found not far from where Lesley Ann Downey had been buried. Keith Bennett’s body, however, has never been found. His mother plead with Brady to find out where Keith was buried before her death but was never granted this by Brady and died in 2012.

In 2002, Hindley died of bronchial pneumonia at the age of 60. While on her death bed she had some private documents, written for lawyers that until now have remained under wraps, they describe a catalogue of sadistic abuse by Brady with threats of murder if she did not comply.

In 2017, Brady died of unspecified chest and lung conditions at the age of 79.

Gates of Janus: An Analysis of Serial Murder by Ian Brady

who my lovely friend Ash, gifted me last year!

This has been a case requested twice, so here it is!

If theres any case you want to see on my blog, leave a comment or email me through my contact page! It would also mean the WORLD to me if you could follow via email, if you do not have a wordpress account ❤

View all posts by thecrimefiles